One of the many joys of traveling is not knowing where you’ll be spending your holidays–and on this trip we’ve had a few. Canada Day in an airport, Independence Day in Ohio, our Anniversary in Toronto, Hallowe’en in Bali, Christmas on a train, New Years in Chiang Mai, and now our Birthdays. Mine in Hanoi and Halong Bay, Sarah’s in Hoi An, Vietnam. 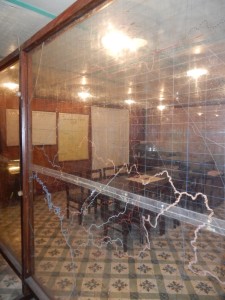 My birthday started off, as all good birthdays should, at 12:01 AM. Earlier that day was spent wandering around the Hanoi Citadel – home to centuries of history and various dynasties, all the way up to the underground war planning rooms from the American War, or “Vietnam War” as the American’s know it.

After excessive walking it was time for a drink, and Hanoi is home to “Beer Corner” – an intersection of tiny stools and very cheap beer. And thus it began. 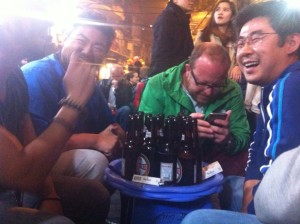 Some of the many travelers we met at Beer Corner.

Within a few rounds we were chatting away with another group of travelers from England, sharing stories, suggesting travel routes and comparing ‘war stories’ of various Vietnamese Tourist Scams. FYI, if someone asks to fix your shoes on the street expect very good workmanship but exorbitant prices.

Hanoi’s “Old Town” district closes the main roads to bikes and cars on Friday, Saturday and Sunday nights and the streets are filled with revelers. It’s quite a sight. 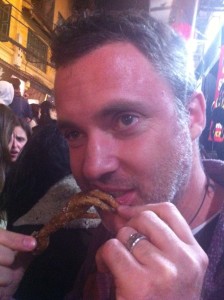 We tried a chicken foot.

After tallying up $9 in $0.47 pint Bia Hoi beers, it was time to move next door for some food. Naturally, moving next door meant wandering around the block looking for what caught our eye. We ended up back where we started, remembering the first rule of travel – the more of you there are, the harder it is to decide anything. With our new friends, we settled down on some more tiny stools, surrounded by literally hundreds of locals, backpackers, tourists and travelers (yes, I make a distinction between each) for some local cuisine – fried beef satay, fried spring rolls, fried cheese sticks(!) and fried chicken feet. Everything a beer swilling traveler could ask for. Let this not be an example of typical local food – we had amazing cuisine for every other meal. 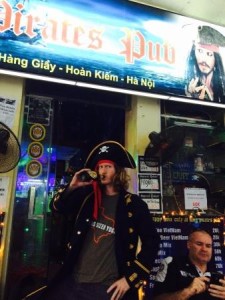 As we approached the threshold of the day of my birth we relocated to the spot that was destined to ruin my next morning, The Pirate Pub. As it’s name suggests, it had swashbuckling Jonny Depp, fishing things, and now one more Jolly Roger. Like so many bars on the travel circuit, this one had a drinking challenge for immortalizing one’s self for time immemorial by “Walking the Plank” required one to throw back 5 shots of spiced rum as quickly as possible without sneezing, barfing or laughing while the crowd chanted, as you can imagine “Walk the Plank! Walk the Plank!” There was no walking, no planking and fortunately, no barfing. It was filmed however so it may one day come back to haunt me. Oh, and I did win a t-shirt and had my name added to the Pirate Barrel.

For some reason, details of the remainder of the night are fuzzy, but the morning I remember. Oh god, do I remember the morning. Up at 6am, breakfast at a harrowing 6:30 and on the bus to Halong Bay by 7. It was a long drive, but we made it.

One would expect one’s wife to carry the birthday boy and his bags to the bus but it was not to be. 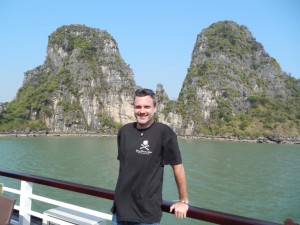 Sarah had organized a 2-day cruise in Halong Bay as my our birthday present and it was amazing. We cruised with Glory Legend Cruise on their newly renovated, 15 room cruise ship. Hangovers washed away as we set off to explore the Unesco World Heritage site, home to floating fishing villages, big tall rock things, and incredible sunsets. 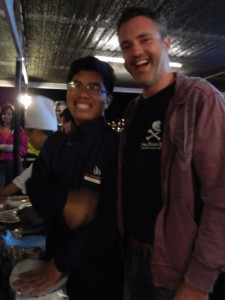 Roger & our new friend Chee. It’s a bit blurry, but then most of the day was.

Our cruise included a nightly lesson on making Vietnamese Spring Rolls (a delicacy historically reserved for Royalty, and as such seemed appropriate), incredible meals, and ‘day trips’ that were organized to the second. Our guide Chi (like the singular of ‘Cheese’) effortlessly guided us from kayaks to view point hikes, to floating village tours while maintaining professionalism and a focused attention to life jackets while on the tender. While locals travel in boats overflowing with people, bikes, animals and children, tourist are in bright orange life jackets, have room to spare, should we need to rescue any capsized locals. 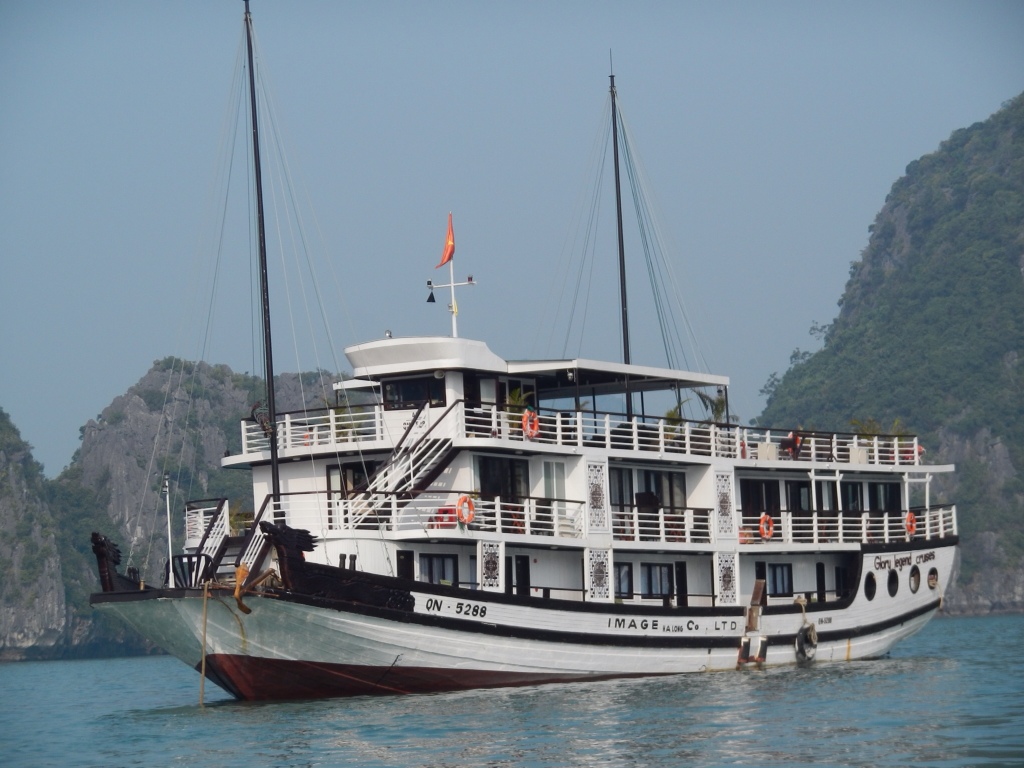 The Legend, our home for two nights 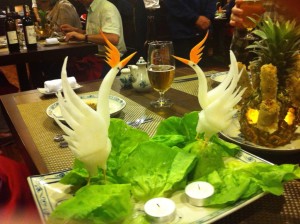 The cook made me some Birthday Swans

It’s a wonderful feeling to have a room full of semi-strangers singing Happy Birthday to you, even if they mumble your name during the important phrase. Instead of the traditional cake, the cook whipped up two swans made of turnip, carrots and lettuce (pictured). Much fun was had by all. I’m also pleased to announce that I “passed” the spring roll making lesson after only 4 attempts. Who knew it was so difficult?

Below are some highlights of the weekend for you to enjoy and marvel at.

After our cruise we returned for one more night in Hanoi – our favourite city of all that we’ve visited – and our favourite hotel, the Camellia 4, just down the road from the infamous beer corner.

From Hanoi we flew to Hoi An, but I’ll let Sarah tell you about that in her next blog entry – just as soon as I can get her off the beach. 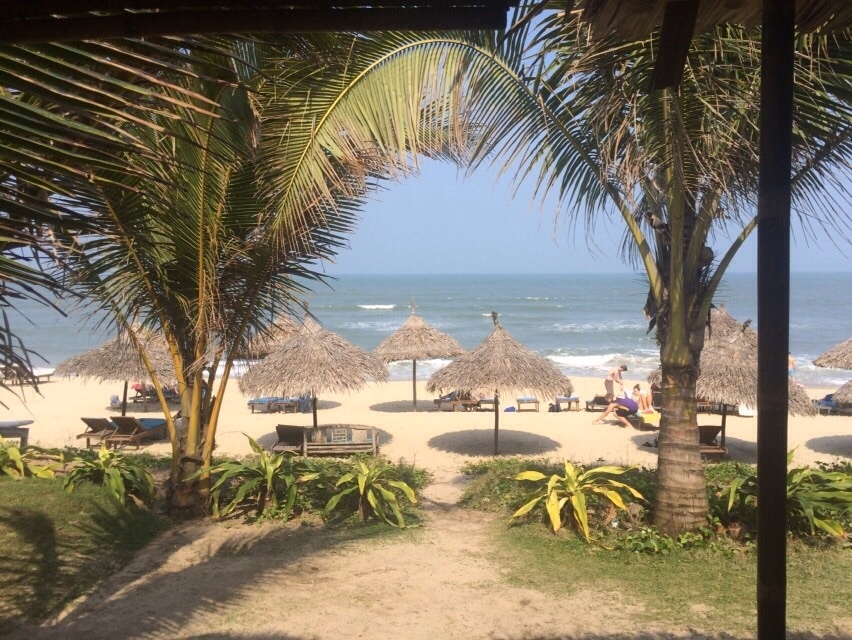