The logistics of moving thousands of frustrated and sunburned travelers through gates, security pat downs, and over sized washrooms onto little bitty airplanes simply amaze me.

One of my favorite games to play at airports is identifying the spies – you know they’re here somewhere.

Another is guessing who’s gasket is going to blow first – the uppity businessman who shouldn’t have to deal with us riffraff but who’s limited success hasn’t ascended him to the ranks of priority lineups; the mother of twelve who’s husband took an earlier flight; or the desk clerks, placed strategically and nefariously between us and the airline bent on screwing us to satisfy their shareholders.

In Perason’s Terminal 3 it appears they’ve installed hundreds of iPads at the gates to distract us from the world’s highest airport taxes and, perhaps, to prevent us from communicating with each other, finding our common frustrations and forming gangs of economy class lynch mobs, brandishing our over-sized carry-ons and storming the gates. 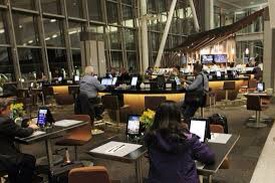 At the nearby over-priced “cafe” they carry the standard plastic wrapped apples, dry tuna croissants, and something that caught our eye – an idea so brilliant that it leaves us wondering what took them so long – boxed water! No plastic, easier to ship, and still just tap water for $2.79. Genius. Oh, and they donate 20% of their profits towards water and forest sustainability. Conscientious Capitalism.

A spy would never buy water when the tap water is perfectly good.

And so we sit, waiting, praying, trying not to look at others for fear they think we’re terrorists, waiting some more, and wondering how EasyJet can fly people across Europe for £13 when it costs $850 to fly from Toronto to Vancouver.

Oh, our flight just got called. Next stop, Iceland. We hope.