Sarah and I arrived in Indonesia on October 10th. We had a few days in the city of Jakarta, northwest coast of Java, one of Indonesia’s 17,508 islands, and the capital of the country. Home to over 9.7 million people, it is one of the most “populous urban agglomerations of the world“. I’ve never seen so many scooters.

We were hosted by a good family friend of Sarah who, along with her family, showed us the city, introduced us to more locals and invited us to take part in Jakarta’s first Breast Cancer Awareness march, Jakarta Goes Pink. With over 3000 participants it was a stunning success, and an incredible experience.
.

Our hosts invited us along to a wedding reception and suddenly we were on the tail end of a 1500-person receiving line. Indonesian weddings are never small affairs. The bride and groom were still glowing, smiling and welcoming, even after hours of glowing, smiling and welcoming. No food or dance for them – that’s for the guests – and wow, what food!
. 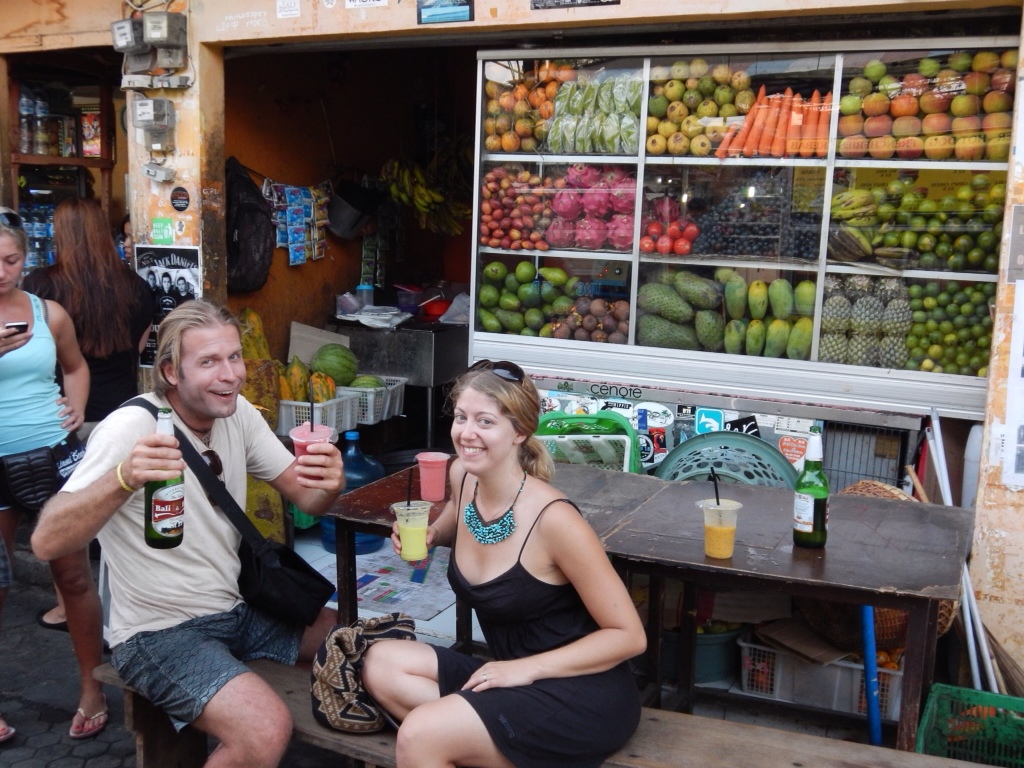 After a few days of Indonesian introduction, family and culture, we moved on to Kuta on the island of Bali. Not exactly the cultural hub of Bali, but certainly the loudest. Home to drunk Aussie “Bogans”, enthusiastic vendors, and world class surfing, Kuta never sleeps – nor did we thanks to the night club across the street. Fresh fruit juice of any flavour: 7,000Rp (CA$0.70), large beer 27,000Rp ($2.70), delicious street food 15,000Rp. Our pal Jonny has been an excellent tour guide – I think, parts of the week are somewhat fuzzy.

Indonesia was “formally” colonized (notice the root word “colon”, suggesting what was done to the people and culture that were already here) by the Dutch in the late 1700’s after 100 years of their “informal economic dominance”. Indonesian’s (re)gained their independence around 1947, after the Japanese occupation during WWII and a two year “conflict” with the Netherlands who wanted “their” land back.

Indonesia has the largest economy in Southeast Asia, with an estimated gross domestic product of almost 1 trillion dollars(!) In 2011, it was the 10th largest economy by nominal GDP in the world and yet, according to a number of citizens I’ve asked, Indonesia is considered a third world country.

Think about that for a moment.

And do we even have “second” world countries??

Corruption is known to be rampant throughout the government, and from what I hear will be even worse with the latest president and his band of lovelies, sworn in last week to much hurrah. It’s interesting to note that if one is pulled over by a police officer, one must simply pass over 50,000Rp (CA$5.00) to be relieved of any concerns and allowed to drive away. Apparently that’s the cost of saving them paperwork. [Update: Yesterday our taxi driver was pulled over, the driver asked to step out of his vehicle (so we couldn’t watch….) and told to hand over some cash. I guess the police don’t want the tourists seeing this, but we did.]

With corruption like this at the police level, a government known to be lining their pockets with cash as fast as they can, and a country of citizens working their asses off for US$200.00/month on average (that’s approximately $2.20/hour IF they only worked 40 hours a week, which they don’t), I’m left wondering how anyone could expect the average Indonesian to give two-shits about laws and regulations themselves. And yet I’ve never felt in danger, I’ve yet to meet any meanies, and everyone seems to be fairly happy. Granted it’s bad business to beat up on tourists, but until you ask them about their police, government, or international trade agreements, the locals I’ve met are surprisingly content considering how depressed many North Americans are.

All the same crap at 5% of the cost

As your shirt label may tell you, Indonesia has an enormous manufacturing hub, primarily for American and European brands of useless crap. Adidas shoes, Prada bags, wooden penis bottle openers, and so-wrongs of all colours – all knock-offs of course.

I’m told that most of the manufacturers do a run of the “real” products which are packed up and sold to Schmuks around the world and then do a run of identical “fake” products which are sold to Schmuks that come here from around the world. The “fake” products are identical to the “real” products but sell for 5% of the “Suggested Retail Price”. Schmuks around the world gullible enough to pay the “real” price are of course quick to point out the differences as they rush to this season’s sale, just as the Emperor did when he tried on his new clothes, me thinks. The beauty of this arrangement is the Schmuks still think it’s the ’80s when “fake” products were reverse-engineered and copied illegally over here while the ‘real’ products were manufactured at higher qualities factories in the USA. Thanks to Globalization it’s now just a shell game and a false illusion of consumer choice. It ain’t the 80’s any more. 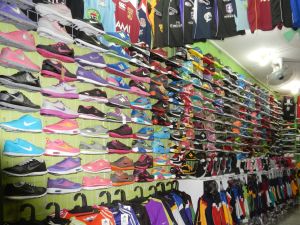 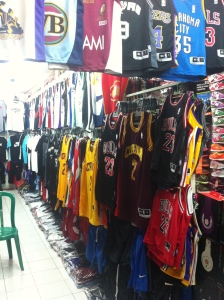 They should pay us for advertising for them.

Perhaps I’m being harsh, but if Nike will pay US$2.3 Billion (that’s with a “B”) on its advertising budget in 2009 just to market its corporate feces everywhere I look, perhaps they should also pay us to wear their logos on our chests. Don’t get me started about the shoes and handbags, but sometimes people’s stupidity amazes me. I’m no expert, but logos on the outside of clothes are proof of a mindless consumerist society.

Despite the country’s income from manufacturing all this “stuff” we seem to “need”, the government doesn’t seem to give much of it back to its people. There is no minimum wage, pensions or safety net – you either work or starve. Old? too bad. Sick? tough luck. Well actually, if you’re sick you will get treated but you’ll have to wait until they’ve helped everyone with cash first. Ironically, a few weeks ago in Jakarta Sarah and I went in for immunizations and not only did we save 60% versus having them done in Canada (80% cheaper than the UK!), we were served within 15 minutes, treated wonderfully, and back on the street within an hour. After touting this amazing service on Facebook, I’ve now learned this was because we were paying cash. As always, the rich get served, the rest are forced to wait. Hey America, sound familiar?

My name is Roger, I’m a Conscientious Capitalist, and I look forward to when Capitalism evolves to serve the poor as well as the rest of us.

I could go on about the economic erosion of this country by the leaders and globalists, in fact I think I will, in another blog post, but let’s move on. 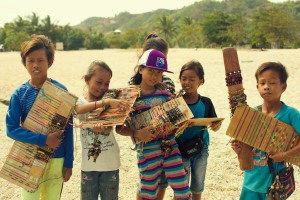 In spite of the economic disparity between the authorities and the citizens, we have found Indonesians to be wonderful – welcoming, friendly, and proud. Like any ‘first world’ citizens, we are the rich visitors and you need to keep your wits about you or you’ll buy more handmade bracelets from adorable kids and adopt more stray cats, dogs (and kids?) than you can ever ship home. We’ve never felt unsafe, worried about pick-pockets, or been harassed more than we deserve. When someone on the street asks for 1000Rp ($0.10) you wonder what we complain about back home. 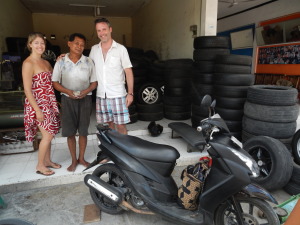 With no safety net, everyone becomes a small business owner. Massages are $5, “street food” is $1.50, tour guides, taxi drivers and tattoo artists are everywhere, and scooter owners offer you a lift every 2 minutes. You can even get a scooter tire fixed for $1. Painters, carvers and weavers offer custom work, and you only have to stagger 4 feet to buy a beer from a cooler on the beach.

Speaking of beaches, boy, does Bali have some beauties. Words can not describe. We have had some surf lessons, some beers on the beach (our new friends Addi and crew pictured below) and we’ve even done a bit of work thanks to reliable 3G network connectivity all over the island.

Overall, Indonesia is amazing. Surprisingly lush considering they haven’t had rain for 3 months, full of wildlife (monkeys and birds as well as Aussies), beautiful weather, and lovely, lovely people.

In time the government and police situation will see reforms, the people will be given the support they deserve, and with any luck, the idea of Conscientious Capitalism will spread and help everyone find a more stable balance. Until then, it’s off to the beach to support a local bartender.