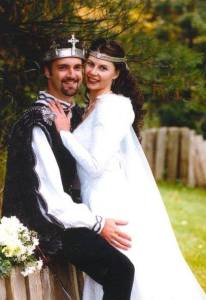 Toby & Tara on their wedding day.

Earlier in the summer we were invited up to Roger’s sister-in-law’s-parents cottage for a few days. This is the site of the infamous Tara & Toby medieval wedding from oh-so-many-years-ago. Costumes, pig roasts, laughter and love – as all weddings should have.

Unlike traditional Ontario summers, the god/desses were smiling on us. Sun all day long, not too much humidity and the mosquitoes weren’t too bad at all. Mind you, I’m not sure Sarah would agree to that, but perspective, man, perspective – it was nothing like a “normal” Ontario summer!

Manitoulin Island in Lake Huron is the largest freshwater lake island in the world and on it, Lake Manitou is the largest lake in a freshwater island in the world. It’s located in what some might call “northern” Ontario, but considering Ontario’s size its actually barely in the middle. I had hoped to show Sarah some of northern Ontario but who has the time?! This is close enough. Interestingly, many people out west call Ontario “Eastern Canada”… really its more “middle eastern”.

Like the rest of the “new” world, the island was home to a number of aboriginal/native tribes, each soon to be devastated by disease brought by the white man (and woman). In the late 1600’s the native people burned down the entire island as they left to cleanse it of disease. Rather rash really, and the island sat empty of people for 150 years. Likely why it is so glorious today. Leave nature alone and it soon forgets about us.

Enough history. We had a wonderful week with Tara’s family. Mum celebrated her birthday in style, I got a pedicure (sort of) and we had loads of wonderful days with everyone. Here are a few photos: